I didn’t really know what to expect from Cambodia before I went. I didn’t know much about the country, about the people or about the food. To make it even more intriguing, Cambodia causes quite a divide between travellers between those that really love it to those that really hate it. There’s no denying that it’s one of the poorer countries in the region. Years of oppression and genocide have set it back a lot of years and it is much less developed in comparison to neighbouring Thailand and Vietnam. It’s poverty means that it is more a more dangerous country. As a traveller you do have to exercise more caution. Everything takes a little more planning. Despite its poverty, Cambodia is one of the more expensive countries to travel in as tourist prices are in US dollars and not the local currency, Cambodian Riel.

As my trip around Asia drew to an end, fitting in Cambodia was a bit of a squeeze into the last week of my trip. One week is nowhere near enough to see this diverse and untamed country but it was enough time for me to fall in love with its craziness and  rugged beauty and to make me want to go back.

Here’s my guide on how to have the best week ever in Cambodia. 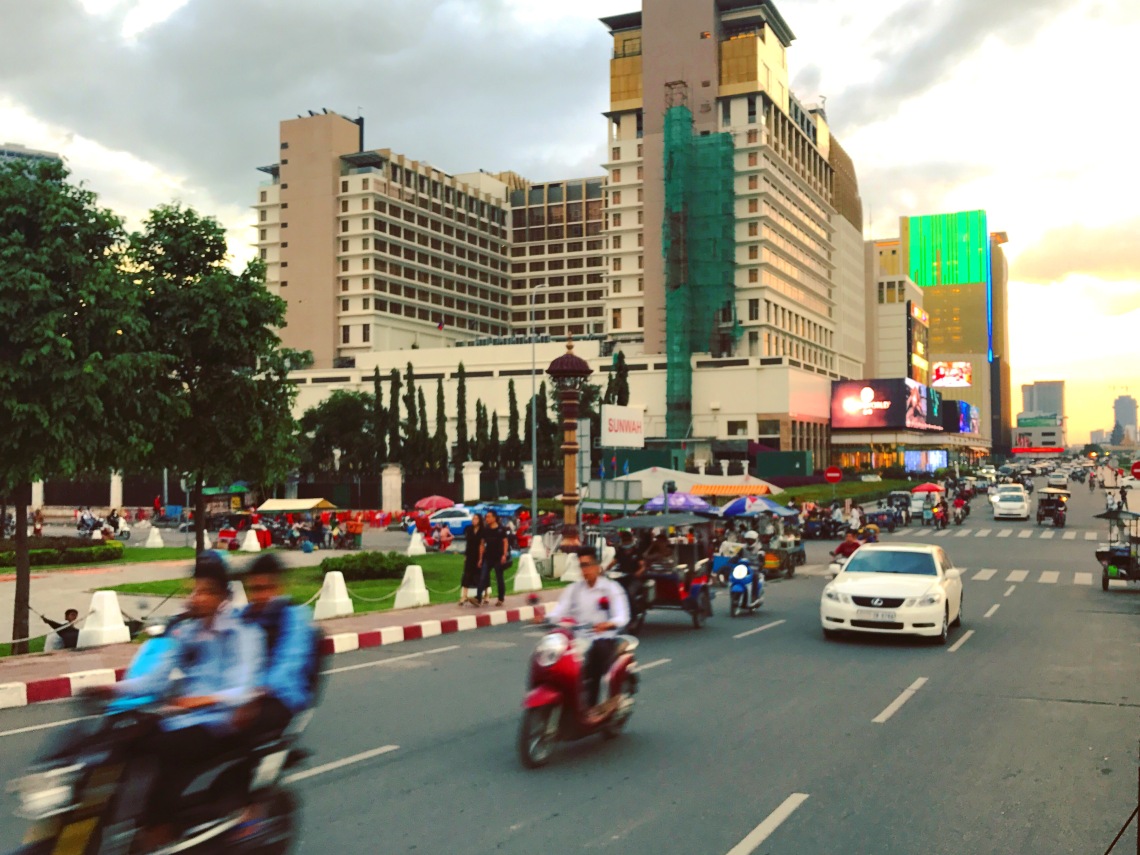 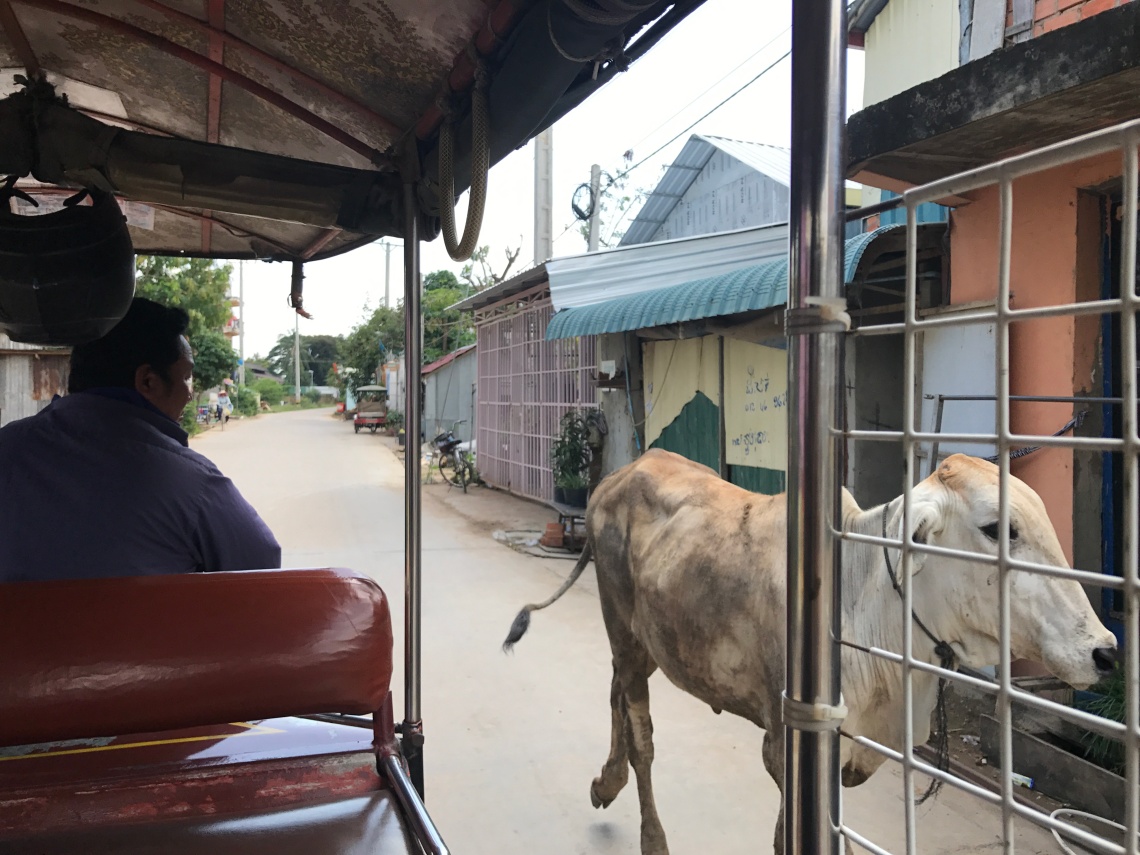 Booming, intriguing, chaotic, Cambodia’s capital, Phnom Penh is where you will enter from Vietnam, and makes a good place to start your adventure. Welcome to the city where cows roam the street, where your tuk tuk drives down the wrong side of the road and where street food bears more resemblance to an anatomy lesson than to dinner. More so than any other place in Cambodia, Phnom Penh is haunted by its horrific past. Most tuk tuk drivers make their money from ferrying tourists between the sombre killing fields and to the well preserved S-21 prison. Examples of extreme poverty can be seen everywhere. Children who should be learning in school are playing on the streets. Many families are still torn apart from the Khmer Rouge regime, yet to be united.  However as it remembers it past, Phnom Penh continues to grow. Huge skyscrapers, shopping malls, hotels and apartment blocks are springing up. Increased tourism is bringing money and Phnom Penh is starting to change.

If you have more time then head down to Kampot, a sleepy city in the South, known for its colonial buildings, pepper plantations and laid back vibe.  If you haven’t got the time,  and if the beach is calling then it’s time to head down to Sihanoukville. The only way really to get there from Phnom Penh is by bus. Don’t risk it and take the public bus, they’re not safe and there’s plenty of horror stories online. Pay the bit extra and book a bus with a private bus company. The Ibis and the Mekong Express are both reputable companies and you can book these online at bookmebus.com, through a travel agent or via your hostel. The journey takes about 6 hours.

Sihanoukville in itself is nothing more than a pit stop to get to the Cambodian islands of Koh Rong and Koh Rong Sanloem.  Located on the gulf of Thailand, these islands are shockingly lush and beautiful with long stretches of white sand and secluded beaches. Some say they bear resemblance to the Thailand islands before they became so popular. The two islands has somewhat of a cult following behind them and many people absolutely love one but hate the other and vice versa. 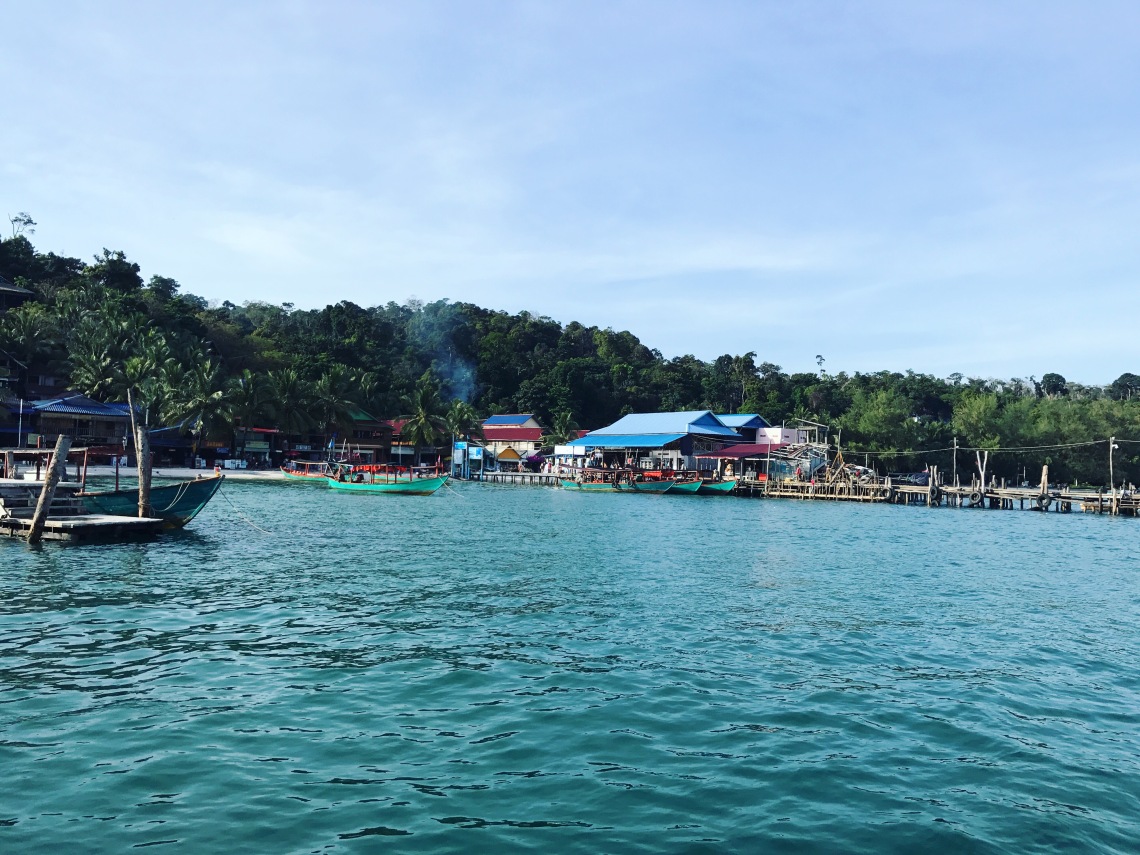 Koh Rong is the bigger of the two islands and the one I went to first. It’s known as the party island and it lives up to its reputation. By day the island has a low-key vibe. Little bars and cafes line the small of beach at the harbour, the ‘town centre’ of Koh Rong. The island has become a little oasis for hippies and for backpackers that have just stopped. It’s got a friendly atmosphere to it but even by day the accumulation of bars along the seafront indicates that alcohol is very much at the centre of this island.

If partying isn’t really your thing then you may want to head straight to Koh Rong Sanloem. Alternatively you can stay on one of the quite beaches on Koh Rong, located the other side from the strip. Most of these are private beaches with one resort. Make sure to check with the hotel or hostel how to get there though. These beaches are accessible by boat only and hailing a taxi boat on arrival can be expensive. You’re usually looking at about 30 USD. One way.

There are two daily crossings between koh Rong and Koh Rong Sanloem. The times vary but you can book these at the port. This was by no way a pleasant journey and by no means really a cheap one either. I paid around 7 USD for my hour-long endurance in what was essentially a supply boat, but this is the only option. Expect a choppy, unenjoyable and vaguely terrifying journey. It will be worth it when you get there. 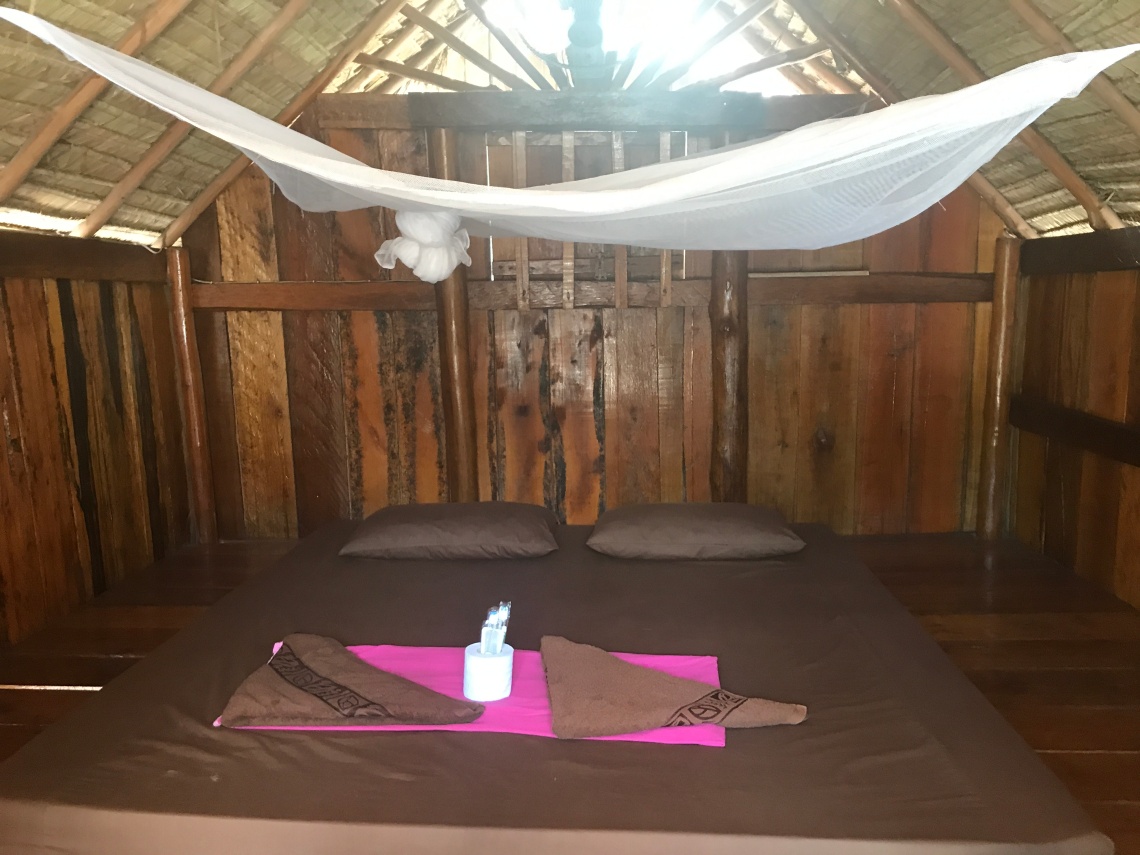 Koh Rong Sanloem was my favourite of the two islands. It’s a serene, tranquil, beautiful little paradise. It’s the kind of island that you’d dream about going to if you were having a nervous breakdown. Even on the main beach, Saracen Bay, there are limited resorts and even more limited wi-fi. You’ll arrive at one end of this crescent-shaped bay and the 3 Kilometre white sand beach will stretch out in front of you. I stayed for two nights here but I could have stayed much longer. The same as with Koh Rong, if you are looking for complete and utter isolation then you can opt to stay on another beach further around the coast but again, make sure to work out how to get there. Unlike in Koh Rong, there aren’t even many expensive taxi boats to hail down. The boat from Koh Rong may be able to drop you at your beach but you need to pre-arrange this.

Saracen bay in itself is beautiful and quiet anyway so I would probably suggest making your life easier and staying there. Accommodation starts from cheapest near the pier, getting more expensive and high-end as you progress up the bay. The Beach Island Resort is a great budget option and will make you feel like you’re playing a part in a desert island movie. I’d heard great reviews online about this little place, offering beach bungalows and dorms right on the beachfront, and it didn’t disappoint.

For night two, I wanted a little luxury. I’d been walking down the beach, past all the fancy hotels and I was  jealous. Right at the end, the resort that really caught my eye was a particularly plush looking one with a beachfront infinity pool and luxury bungalows called The One Resort. I decided I had to live it up for one night. Look out for my guide: Checking in to paradise, for more information on this.

By now you should have a bit of a tan and your week in Cambodia is nearing an end which means there’s only one place left to go: Siem Reap. It would be criminal to visit Cambodia and not visit Angkor Wat, the symbol of the country and one of the great wonders of the world. 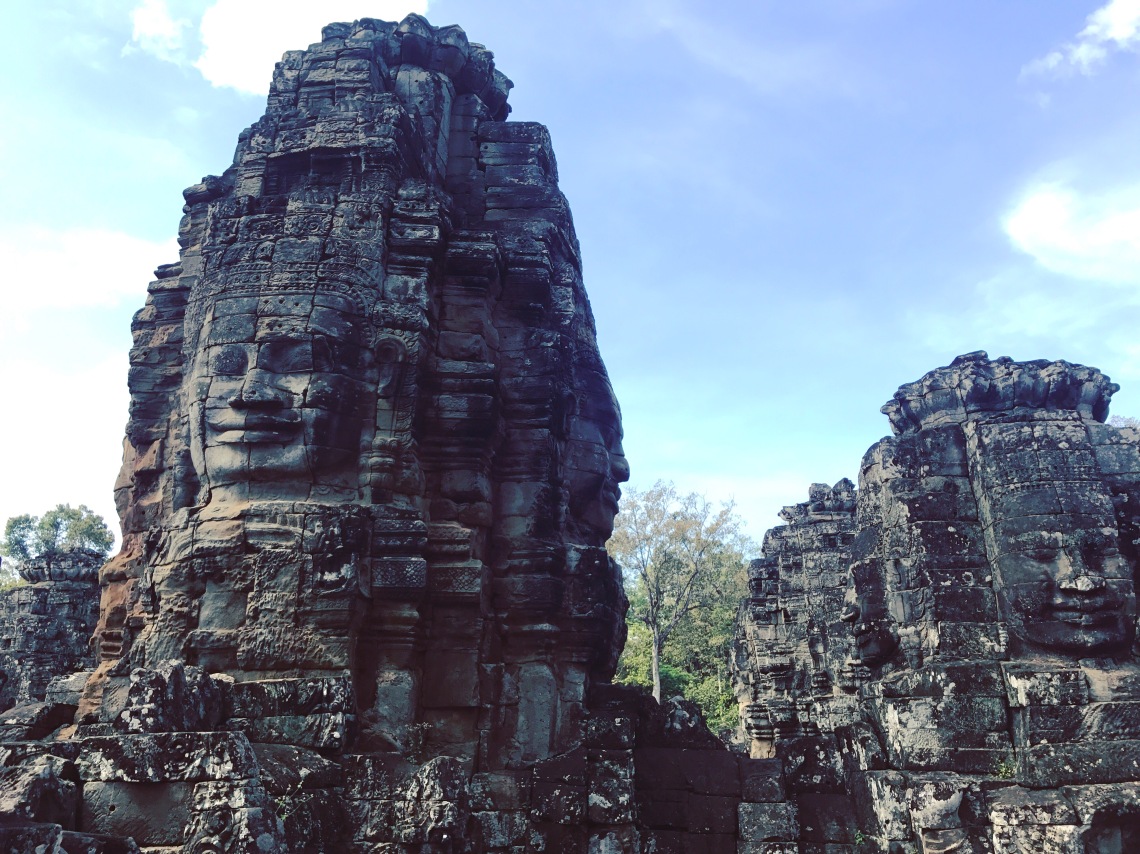 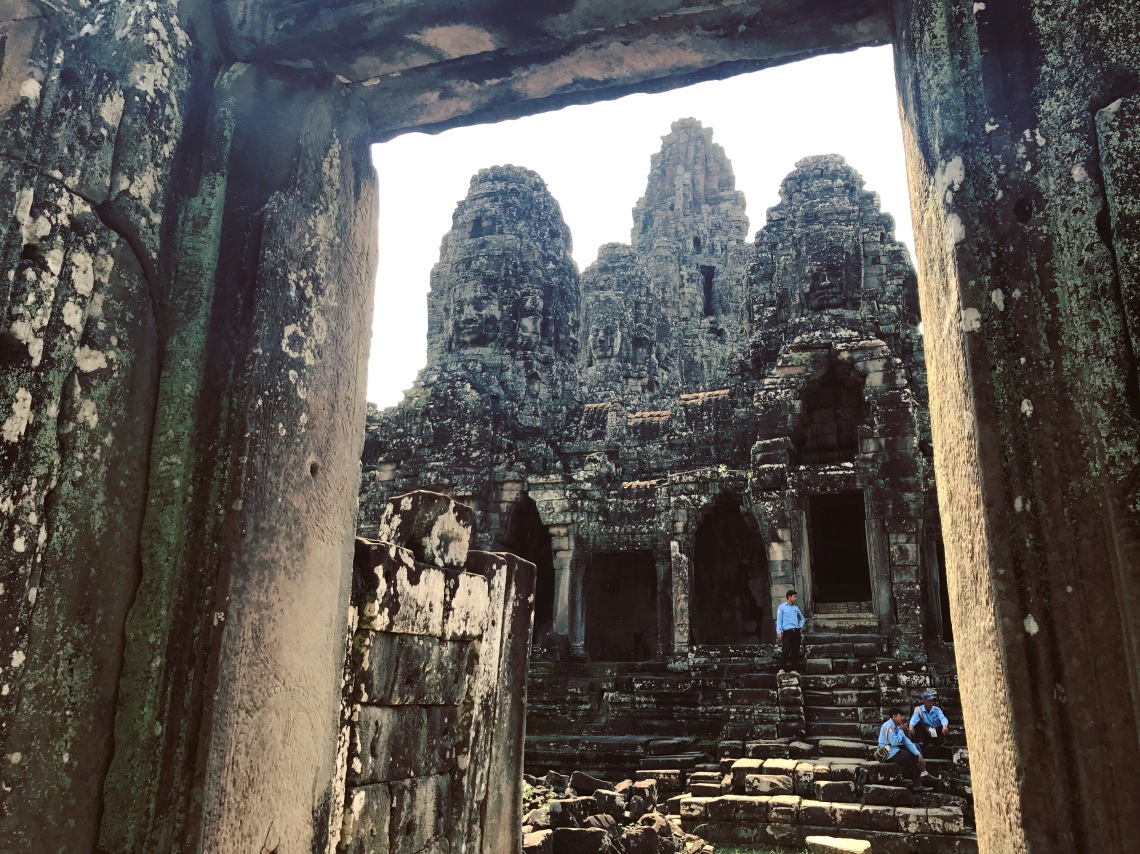 Located just outside of Siem Reap, the temples of Angkor are vast, romantic and captivating. Over a thousand years old, they once made up the largest city in the world. Now they are overgrown and crumbling, but even more impressive. Even in the largest Angkor Wat temple, it is spookily tranquil. Trees grow through brickwork, crumbling corridors come out at little shrines, colossal staircases open onto captivating views. It would take days to see all of the temples that once made up this city but if you’ve only got one day then you can still get a good sense of the scale and significance of the place.

The best way to visit the temples is by hiring a tuk tuk driver for the day. Ask your accommodation to book one or hail one down yourself and negotiate a price. You’re usually looking at 15-20 USD for the day. My driver took me on a small tour to the most popular temples. Unless you plan on watching the sunrise at Angkor Wat, it’s a good idea to do the tour backwards, ending with the most impressive main temple. I started off visiting smaller temples, Ta Keo and Ta Phrom before heading on to Bayon. This was probably my favourite temple, in which the crumbling pillars are adorned with colossal faces that give the place a slightly macabre feeling to it.

I headed to Angkor Wat last. The long walkway to this temple is a spectacle in itself and the sense of anticipation build in me as I walked there. Outside, the scale of the temple is massive and it’s presence feels ominous. Inside it is serene and mysterious. For one of the most popular tourist attractions in the world, it doesn’t feel like it once you get inside. It is  silent apart from the odd whisper and with buddha statues, monks giving blessings, crumbling pillars and the smell of burning incense, it’s hard to not feel spiritually enlightened. The temple runs on four floors with a steep and difficult climb to the top-level. This is supposed to illustrate that reaching the heavens is not easy.  The views over the grounds are worth the arduous climb.

I felt quite overwhelmed when I left Angkor Wat. I think it’s hard to come to a place as impressive and significant as it is and not reflect.  Angkor Wat is the national symbol. It is even featured on its flag. In recent years, Cambodia has faced unbelievable suffering, poverty and hardship but these temples pre date that and remain preserved today, fighting to survive as the jungle tries to reclaim them and pull them into oblivion. These Temples are an example of the strength that Cambodia and its people have shown and an example of how throughout time, oppression and genocide,  Cambodia’s faith remains at its core.

Head up to the quirky and low-key city of Battambang in Northern Cambodia.

Time to move on?  Siem Reap is one of the easiest places to cross into Thailand from, with regular buses going to Bangkok.

Hey, I’m Phoebe, a 20 something travel writer from the UK with a serious case of the travel bug.

Passport Please is a way for me to combine my two biggest passions: backpacking and writing.

I write about my cafe filled adventures and budget travel along with touching on broader issues that affect all of us in their teens and twenties.